You are invited to participate in the Melanie Smith Taylor Clinic sponsored by the Germantown Charity Horse Show Association. The clinic will be held at the Germantown Charity Horse Show Grounds on May 19-20, 2018 in the heart of the city of Germantown TN, a suburb of Memphis. Several excellent hotels and restaurants are located within minutes of the grounds. The free permanent stabling is safe and secure. Parking is easy and convenient.

For details about the clinic, please use this form. We look forward to seeing you in May! 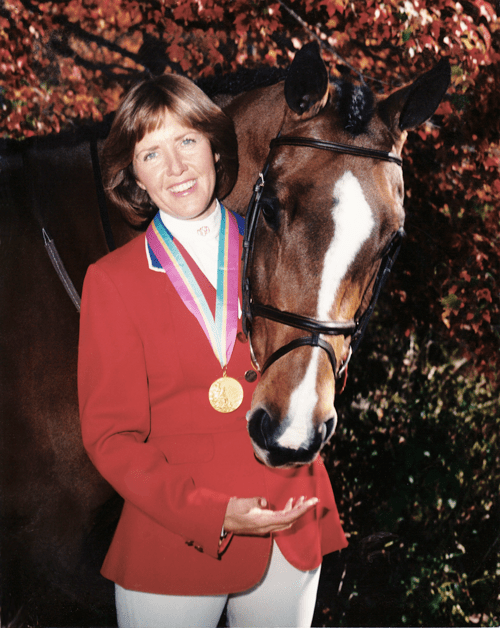 Melanie Smith Taylor lives in Germantown, Tennessee. She and her late husband, Lee, raised and trained Thoroughbreds for polo, hunter/jumpers, and pleasure on their Wildwood Farm in Germantown. Melanie’s show jumping achievements are well known. From an early childhood on a farm in her home state of Tennessee, she went on to gain international recognition as both a competitor and a trainer. While training with George Morris in the early 1970s, Melanie was successful in amateur/owner jumper classes before graduating to the Grand Prix level. In 1978, she earned the American Grand Prix Association’s Lady Rider of the Year title as well as the AGA’s overall Rider of the Year. Her wonderful record that year convinced the AGA that women could perform on completely even terms with men, leading to a decision to discontinue the separate Lady Rider award. To cap off her year, Melanie’s mount Val de Loire was named AGA Horse of the Year.

Melanie became one of only two riders ever to win the Triple Crown of Show Jumping by winning the American Invitational, the International Jumping Derby, and the American Gold Cup, and the only person to win all three on the same horse, Calypso. Melanie was part of the USET’s gold medal team at the 1979 Pan American Games in Puerto Rico. At the Alternate Olympics in 1980, Melanie won the individual bronze medal aboard her beloved Calypso and placed second that same year in the World Cup Final. After winning the World Cup Final in 1982, she was named the United States Olympic Committee Sportswoman of the Year, as well as being inducted into the Tennessee Sports Hall of Fame.

Riding Calypso, Melanie capped her show jumping career with a team gold medal in the Los Angeles Olympic Games in 1984, a year in which she was a finalist for the Sullivan Award, an honor given to the nation’s top amateur athlete.

Melanie retired from active competition in 1987 and since 1988 has been the Equestrian voice for NBC and NBCSN for the Olympic Games, World Championships, and numerous other events. She continues to serve the horse world by designing jumper courses and teaching clinics around the country, and is a recognized judge for hunter/jumpers, hunt seat equitation, and hunter breeding.

In 2007 and 2008, Melanie coached the Developing Rider Tours, which won numerous competitions and Nations Cups throughout Europe. She was honored as the Developmental Coach of the Year by the U.S. Equestrian Team in 2007. In 2009 she helped develop the Emerging Athlete Program (EAP) with the U.S. Hunter Jumper Association.

Melanie has written a book, Riding with Life: Lessons from the Horse, published in 2015. Blending her in-depth knowledge of groundwork and flatwork with her vast hunter/jumper experience, she explains how to achieve a harmonious partnership with your horse and realize his full athletic potential—whether you’re a weekend trail rider or a serious competitor.

Note: The Commissary located in the pavilion only accepts cash at this year’s show!

To Book Room By Telephone

Call (901) 309-0555 and ask for reservations. Give the arrival/departure dates and mention group code GCH. Verify the group name is Germantown Charity Horse Show 18 . Verify the group rate of $121.00 for a King Suite or a Double Suite. The booking agent will ask for a credit card number to guarantee.

After 05/18/2018 at 11:59PM, all remaining rooms will be released and requests for reservations will be made based on rate and availability at the time of the call